As communicated first in July 2017, after careful consideration, Lundbeck has made the decision to discontinue the manufacturing of Frisium® (clobazam) Tablets in Canada. This decision was not triggered by a safety issue, but rather is based on the numerous generic clobazam alternatives available in Canada.

Due to an increased demand of Frisium in the second half of 2017, we now expect our current inventory to be depleted in the third quarter of 2018.

As mentioned before, Lundbeck first communicated this change well in advance to give healthcare professionals, patients and families as much notice as possible so that Frisium patients have ample time to successfully shift to an acceptable alternative clobazam therapy. Health Canada also was notified last summer. As well, we have listed our proposed discontinuation date on the drug shortages website in Canada.
As a company with a strong record of supporting the epilepsy community, Lundbeck is aware of the ongoing struggles many physicians and their patients experience in managing seizures. We are deeply committed to the epilepsy community, which is why we are taking several steps to ease this transition, including:

• Providing access to Lundbeck’s Medical Information team at 866 880 4636 to address questions or concerns. We will closely monitor responses from patients, their families and healthcare professionals and address concerns appropriately.

• Distributed two discontinuation letters to a comprehensive list of physicians, pharmacists and patient advocacy organizations throughout Canada in July 2017 and January 2018, providing more than a year’s lead time to enable a carefully thought-through treatment transition plan.
○ A final letter is scheduled for the summer of 2018.
○ Patient advocacy organizations will be encouraged to share all notifications for use in on and offline communications materials, as appropriate.

• Implementing allocation plans to ensure appropriate steady supply of the remaining Frisium tablets to the market based on historical demand.
• Conducting outreach to pharmaceutical wholesalers.

Again, please contact Lundbeck Medical Information at 866 880 4636 if you have any questions.
Sincerely,

One of the greatest frustrations Epilepsy Ontario deals with during shortages of seizure-control medications is when impending drug shortages are identified but Health Canada and the provincial drug programs do nothing to try to prevent them, says Suzanne Nurse.

Nurse, Epilepsy Ontario’s director of information and client services, says that 2016 has been one of the worst years, so far, for shortages of medications needed by people living with epilepsy since shortages began about five years ago.

Pharmaceutical companies have gone into shortage on multiple anti-seizure drugs. Lack of information about the shortages as well as lack of processes to prevent and manage them is putting people at risk as well as creating serious anxiety for people living with epilepsy and their families, she adds.

“There seems to be a failure to recognize how drug shortages evolve,” Nurse says. “We can see when a serious shortage is coming, one that will have an impact on people with epilepsy. We just can’t understand why (Health Canada and the provincial drug programs) that are overseeing the drug-shortage response can’t see it.

“We evaluate a couple of key factors: Are there only a few suppliers of a drug? Is the shortage expected to last a long time? Are the major suppliers affected? If the answers are ‘yes,’ ‘yes’ and ‘yes,’ then it’s pretty clear a serious problem is heading our way.”

Currently, there are significant shortages of two common anti-seizure medications in Canada: divalproex sodium and clobazam.

“We had to wait until we were in the middle of a crisis to get a response to the divalproex shortage. We’re still waiting to even get an acknowledgement of the seriousness of the clobazam shortage.”

Apotex Inc. first posted shortages of divalproex sodium on drugshortages.ca in June 2015; however, a collaborative effort to address the shortage did not begin until March 2016. The good news is that the response co-ordinated by Health Canada helped turn this around and generic formulations of divalproex sodium are beginning to recover, starting with the 500 mg strength tablets. It will take longer for the brand-name tablets, Epival, to recover.

Just as we’re starting to get out of the woods on divalproex, clobazam is now developing into a major problem. Apotex first reported a clobazam shortage in December. The drug was supposed to be restocked in mid-April, but about a month before the shortage was expected to end the date was pushed back to September. It has since been pushed back to Nov. 30. Pharmacies are now having trouble obtaining generic clobazam as well as the brand name tablets (Frisium).

Epilepsy Ontario wants to see a proactive response to anticipated drug shortages to prevent them from happening in order to reduce the impact on people living with epilepsy. With both the clobazam and divalproex sodium shortages, federal and provincial agencies were contacted to inform them of the impending shortages, but no proactive action was taken, Nurse says.

The drug shortages, coupled with the erratic changing of restock dates, are putting people’s safety at risk, Nurse says.

“Any shortages of medication that control seizures are of serious concern because epilepsy is a condition that you need to maintain good control of – missing a dose of a drug or changing medications, any kind of change like that can affect seizure control, so any drug shortage is a serious concern,” she says.

“The clobazam shortage is an even greater concern than most of the drug shortages that we deal with for epilepsy. There is no other drug like clobazam that can replace it when it is in shortage.”

When it comes to epileptic seizures, it’s safe to say tonic-clonic seizures are the most recognized – and misunderstood – variety.

A new video on Epilepsy Ontario’s website provides insight into what tonic-clonic seizures are, what to do if you see someone having this type of seizure and what not to do.

In the video, a man and his girlfriend are walking through a park. Suddenly, the man stops in his tracks, falls to the ground and begins convulsing. Luckily, his girlfriend knows how to react. When she sees her boyfriend begin to fall, she responds right away and asks a person nearby to help her make him comfortable by placing rolled-up clothing under his head.

The stranger then asks the man’s girlfriend, “Is he going to swallow his tongue? Are you supposed to put a spoon in his mouth or something?” The woman then explains that putting anything in a person’s mouth during a seizure is dangerous.

“The best thing we can do is wait it out,” she says. “We’ve just got to make sure and there’s nothing around where he can harm himself.”

A common reaction when people have a tonic-clonic seizure is that someone calls an ambulance. However, unless the person does not have epilepsy, is in water, pregnant, or is injured from the seizure, calling for medical help is not necessary.

Medical help should be called if a seizure lasts longer than five minutes. Because of this, timing seizures is crucial. Medical help is also needed if a second seizure begins before the person has recovered from the first one. Prolonged seizures, or repetitive seizures without recovery in between, are medical emergencies that require urgent treatment because they can result in status epilepticus.

During a tonic-clonic seizure there is widespread seizure activity in both hemispheres and the individual would be unconscious.

Tonic-clonic seizures can start in different ways, depending on the type of epilepsy that a person has. For some people, their seizure may start as a focal seizure in a specific area of the brain and evolve into a bilateral convulsive seizure. For other people, the seizure is a generalized tonic-clonic seizure from the outset. Understanding whether someone has focal epilepsy or generalized epilepsy is important because there are different treatment options.

The video is one of three recently created through a joint project of Epilepsy Ontario and Epilepsy Toronto with funding provided by Ontario Trillium Foundation. The other two videos examine absence seizures and focal dyscognitive seizures.

Each video provides a glimpse into what specific types of seizures look like and explains what steps should be taken by those witnessing the seizure.

“We can use these new videos to show people how to identify different types of seizures and how to help when they see someone having a seizure,” explains Epilepsy Ontario project manager Nikki Porter.

“The videos dispel myths about seizures and (provide information about) seizure first aid. I hope they also help to destigmatize epilepsy.”

Voices of Epilepsy is featuring a series of articles focusing on each of the videos. Click here to read the article about focal dyscognitive seizures. 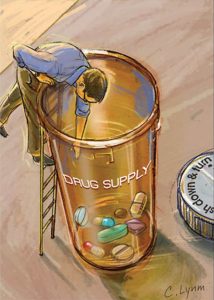 As of Thursday December 17, a total of fifteen divalproex sodium shortages were posted on drugshortages.ca by Abbott Laboratories Limited*, Apotex Inc., Pro Doc Limitée, Sanis Health Inc. and Teva Canada Limited. None of the pharmaceutical companies have provided an explanation for the shortages.

This situation is a serious concern. The estimated resupply dates currently range from December 24, 2015 to April 30, 2016. These dates are estimates and could change. Drug shortages, or back-orders, at the level of the pharmaceutical companies do not always result in shortages at community and hospital pharmacies. Although the longer a shortage lasts the greater the likelihood that it could have an impact on patients.

If you or a family member have been prescribed divalproex sodium (Epival), contact your pharmacist and ask about the availability of your medication.

If your pharmacist runs into any difficulty obtaining divalproex sodium they may be able to find some from a different supplier, another drug store, or another chain.

If the situation worsens and your pharmacist is not able to locate any divalproex sodium for you, it is important to work with your pharmacist and your health care provider to manage the drug shortage in the safest way possible.

During a shortage, your pharmacist and health care provider may explore options that could include filling your prescription with a different strength tablet or substituting a different medication. If your dosing instructions change, ensure you understand the instructions and ask questions if it isn’t clear.

When a drug is unavailable in Canada, Health Canada’s Special Access Program (SAP) will consider requests from health care providers for access to the drug from outside the country. The SAP can be reached 24 hours a day, 365 days a year, and the program strives to process requests within 24 hours of receipt.

It is important to continue to take your medication as indicated. It can be frightening when an epilepsy drug is in short supply but skipping doses, taking less medication, or suddenly stopping an antiseizure drug is dangerous. This can lead to breakthrough seizures, more prolonged seizures or life-threatening events.

* This company may be listed on drugshortages.ca incorrectly. Epival is no longer marketed by Abbott Laboratories Limited. According to the Health Canada drug product database, Epival is currently marketed by BGP Pharma. It appears that old drug shortage notifications from 2012 were re-used instead of creating a set of new notifications for the current Epival shortages.