The seed of the I AM 1 in 100 social media campaign was planted at a brainstorming session at Epilepsy Ottawa in 2019 to raise epilepsy awareness. The idea was put into action, then spread throughout the Ottawa area, was adopted by the Canadian Epilepsy Alliance (CEA) and has now grown across Canada. 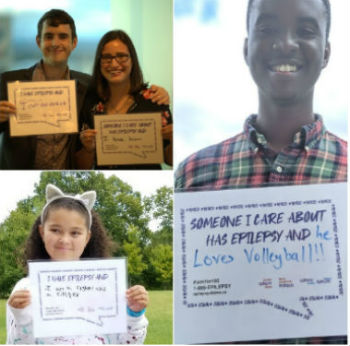 Last summer, members of the Epilepsy Ottawa team collaborated to come up with an idea to create an awareness campaign to launch in March 2020 in recognition of Epilepsy Awareness Month that would encourage people to participate.

One suggestion everyone liked – and the idea that would be adopted – was to encourage people living with epilepsy to write short messages about themselves on signs that started with the words “I have epilepsy and …” and then post them on social media, explains Epilepsy Ottawa executive director Nikki Porter.

Because the team wanted to engage as many people as possible, the campaign was fine-tuned to include family members of people with epilepsy who can participate by posting signs on social media that read “Someone I care about has epilepsy and …”.

People can write about anything they wish, from how they are feeling that day to words that describe their character. Some people are even including information about their hobbies or interests, Porter notes.

“Our goal is to demonstrate that people with epilepsy are more than just their seizures,” she tells Voices of Epilepsy. “The I AM 1 in 100 campaign is really about people changing the public perception of what it means to have epilepsy.”

“What I love seeing is how enthusiastic people have been to participate,” Porter says. “A lot of people are doing this, and I think it’s a great campaign that individuals can do to show their uniqueness and individuality, while also joining with others across the country to raise the profile of epilepsy and to redefine for the public what that means.”

Click here for more information on the I AM 1 in 100 campaign.