Whether you’re someone who loves a good mystery or you just like to have fun, you don’t want to miss a fundraising gala hosted by Epilepsy Ontario and EpLink on Oct. 20. 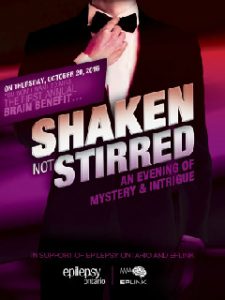 The event, called the Shaken, Not Stirred gala, will be held in Toronto and will feature a James Bond theme that promises “an evening of mystery and intrigue” in the form of spy-themed table challenges. The black-tie event also includes a martini cocktail reception, a three-course meal and a silent auction.

The table challenges will be provided by Escape from the 6, a company that creates interactive games and hosts “escape rooms,” team-building challenges where people have to collaborate to gather clues and overcome obstacles.

“I can’t tell you too much about the puzzles because I don’t want to give anything away, but they will be entertaining and really scrape your brain,” says Andrew Sturridge of Escape from the 6.

“They are puzzles similar to what you would encounter in an escape room, but instead of trying to escape, players will be racing to unlock a secret. … The James Bond theme is really awesome because, really, who doesn’t want to be an MI-6 agent for a night?”

Sturridge says these type of events are also “a nice introduction to meeting people at your table” as well as collaborating with others in a fun atmosphere while raising money for a good cause.

The gala will be held Oct. 20 in the Grand Banking Hall at the One King West Hotel in Toronto from 6 p.m. to 11 p.m. Click here for more information.

If you have feedback on this story, or have a story of your own that you would like to share, please contact the newsroom at 1-800-294-0051, ext. 23, or e-mail deron(at)axiomnews.ca. You can also leave a comment below.