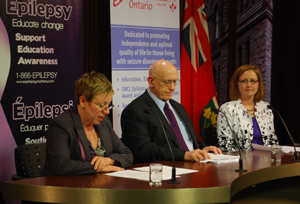 Jeffrey, a member of the epilepsy community and outspoken advocate for epilepsy awareness, says the best thing that could come from Epilepsy Action Day would be heightened awareness of the need for better access to medication for seizure prevention and disability and employment supports for people affected by the chronic neurological condition.

Jeffrey and the other 40 people from Ontario’s epilepsy community, along with representatives from Epilepsy Ontario, met with MPPs and policy advisers during the event. She’s commending the politicians for understanding the key challenges and committing to tackle the issues.

The MPPs understand that “it’s more cost-effective to provide quality care than it is to provide substandard care — we know that for every disorder,” Jeffrey said during the press conference that followed the March 6 event.

Epilepsy Action Day comes on the heels of a recent announcement from Economic Development and Innovation Minister Brad Duguid and the Ontario Brain Institute that support for the Epilepsy Discovery Project is being granted.

The project, which is bringing together researchers, clinicians, not-for-profit epilepsy organizations and the private sector, will examine the effectiveness of pharmacological and gene-treatment therapies, while considering potential benefits of surgery, medical diets and deep-brain stimulation.

The epilepsy community and Epilepsy Ontario took time during the event to applaud the province for this support, as well as to commend MPPs for taking time to listen to the community’s concerns and their interest in learning more about epilepsy.

“Everyone has found the meetings to be very positive and encouraging,” says Epilepsy Ontario executive director Rozalyn Werner-Arcé.

“It has been a great opportunity for those who haven’t known much about epilepsy — people are really engaged and want to know more.

“For those who are familiar with the epilepsy strategy, they’re very excited about it, see the possibilities, and I believe they’ll do what they can to help support it and move it forward.”

While Jeffrey says she’s satisfied with the outcome of Epilepsy Awareness Day, she adds there’s still work to be done and that she will not stop until the epilepsy community’s goals are achieved.

“This is the third year I’ve been here at Queen’s Park for Epilepsy Action Day, (and) I’ll be back every year until we get somewhere with this. It’s desperately needed,” she says.